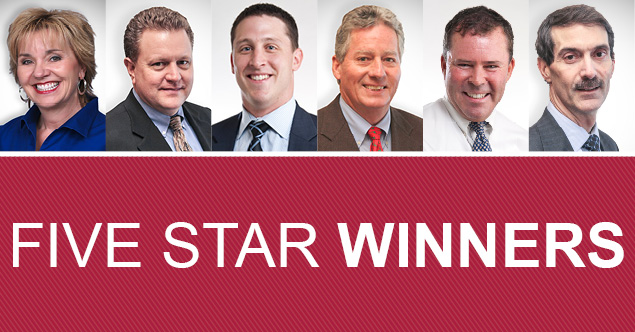 Robertson Ryan & Associates once again has agents recognized as Five Star Award winners. Agents were nominated by a client for a transaction in the last 6 months and nominations put each candidate in a pool of nominees in Southeast Wisconsin. Five Star reviewed the nominees and selected 70 insurance professionals who demonstrated career excellence to win. This makes the winners among 2% of agents in the Milwaukee area with the designation of Five Star Professional for 2017.

Allan Degner, Director of Marketing at Robertson Ryan & Associates said, “Robertson Ryan has a long history of being recognized by Milwaukee Magazine and the Five Star Awards program. We had six agents win a Five Star Award this season and would like to congratulate Kim Acheson on her fifth win, Jeff Frank on his third, Tony Von Rueden on his second and Jim Dunker, Steve Kuhnmuench and Dan Schmidt on their first.  Being recognized as a Five Star agent demonstrates dedication to our clients. We are proud to have this many agents among the top 2% of agents.”