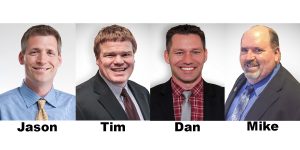 Tony Von Rueden, Robertson Ryan’s’ Board President said, “They’ve earned it. It is who they are as people that make them stand out both in our company and in the broader industry. The IIAW supports and represents independent insurance agents within the insurance industry in Wisconsin. RRA supports their initiatives including government relations, industry education and member development. We are all very proud to congratulate Jason, Tim, Dan and Mike in their achievements and for making a lasting impact in the industry.”